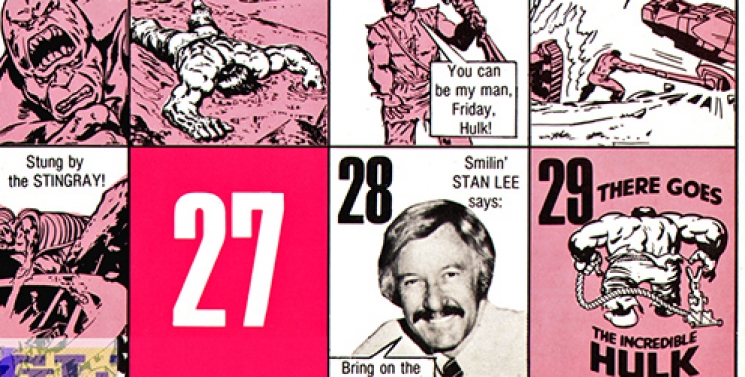 1) Let's start with Young Stanley Lieber on a horse, in the late 20s.

6) Good Guy Stanley met Joan in the late 40s. Not the Joan from Mad Men. But close enough.

Get a room, you two.

At least, he's never going to have a traffic accident.

18) With his best friend, Joe Maneely.

19) 10 months before creating the Fantastic Four with Jack Kirby.

It's true, he smiles a lot.

My bad, that's not Stan, it's Bill Everett, co-creator of Daredevil with Jack Kirby and Stan Lee. I'm so sorry for the mix-up. It will not happen again.

Oops, sorry, that was Steve Ditko. Spider-Man's co-creator, who left Marvel in 1966.

Oups, sorry, again, THAT IS NOT STAN LEE, it was Jack Kirby, co-creator of Fantastic Four, Avengers, X-Men and many others. He left Marvel in 1970.

32) 1971, again. Pic from an article in the New-York Times. That year, Stan indirectly helped reform the Comics Code Authority.

You may have already seen this one, but not entirely. On the left is Richard Pesta, aka Captain Sticky. Photo taken by Alan Light, during San Diego ComicCon 1975.

50) I love those ads for Crazy Magazine.

54) A-hem. What are you doing exactly Spidey?

57) In front of the White House, during the annual Easter Egg Hunt.

58) With Solomon Brodsky, right-hand of Stan Lee at Marvel and the Green Goblin, in front of the White House during the same Easter Egg Hunt.

68) In 1996, Lee announced "Unfinished Business", a new project which would see Marvel temporarily outsourcing the production of several of its most famous comic books to the studios of its popular former employees Jim Lee and Rob Liefeld. "Heroes Reborn", one of the worst thing that ever happened to Marvel was coming.

74) With Mark Waid. If you have a tablet or a smartphone, go read something on Thrillbent, Mark's website. Like, Insufferable or Pax Arena or The Walking Pandas or Moth City or The Eight Seal or The Damnation of Charlie Wormwood...

82) I hope at some point we'll get a Spider-Men team comic-book. With Superior Spider-Man, Scarlet Spider, Miles Morales, Spider-Woman, Spider-Man 2099...

83) Stan Lee is getting old, tough, sometimes he can't find his way back at home and find himself on stage with Aerosmith. 2012.

85) I forgot to put this one before and I don't want to start over the numbering and stuff.

Joan is far too kind with that guy, i'm tellin' ya.

89) Stan in his californian home, where he writes stuff. That's where he wrote the Marvel Infinite Wolverine Special, for example.

91) October 2013. I meet Stan Lee, with my bro Geoffo. No time to tell him that we're now working for Marvel. Enough time to smell his neck.

Damn, I'm sorry, that's a pic of me in front of Steve Ditko's office door. There you go:

Also, if you like digital only comics, have a look at Iron Man Fatal Frontier #12. Geoffo and I did the layouts.